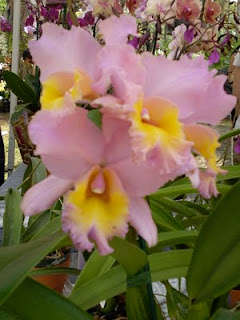 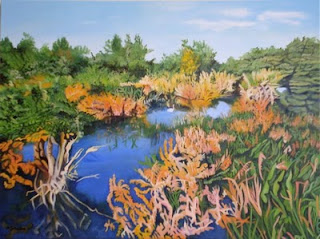 The light, the light, capturing the light eludes me. Paintings that do catch the light are the most effective. Or at least that’s what I learned in school. It’s the reason why Kinkade, whose work I find saccharine, is so successful. It’s why Rembrandt is considered one of the greatest painters who ever lived. I never cared for his work either, which I find much too dark, and his subject matter, primarily portraits and biblical scenes, doesn’t grab me. Yet Vermeer mostly painted portraits, and he’s one of my all time favorites. Vermeer really knew how to paint the light. His studies of women in domestic scenes take my breath away.

Yesterday, I showed my painter friend, Han, a photo I took of orchids at the recent Hatsume Fair at the Morikami Museum and Japanese Garden. I was excited about the photograph not for its photographic value, but because I thought the orchid would make a good watercolor. Han shook his head when he saw it. “Not enough light,” he said. “I could paint the light,” I replied knowing that I just have to paint that orchid.

My paintings often have too much light. It’s the shadows I ignore. Nancy Jones, a photographer and the wife of Bill Jones who is an exhibiting woodturner at A Unique Art Gallery, stopped by last week when I was covering the gallery. We talked about artworks, and she said the shadows interest her the most. So perhaps it’s the shadows I need to concentrate on. By focusing on the shadows, the light will emerge and will be more striking in contrast to the dark. Sounds awfully philosophical to me.

Above is the picture of the orchid I hope to paint and also a photo of my recent work, “Wakodahatchee November.” It was the colors that inspired me to paint the scene on a 30” x 40” canvas, one of my larger pieces. I’m exhibiting it in Vivid Art, a show in Delray Beach, which begins next week, April 4 and runs through June 3, 2011 at 110 East Atlantic Avenue. 110 is a commercial office building on four floors with a lot of wall space and an open atrium that can accommodate paintings up to 72 inches high and 60 inches wide. The building nestled between Café de France and Blue Fish restaurants is an exciting new venue for local art groups. Talking about light, the open atrium is bright and inviting. Here’s hoping it will draw affluent viewers eager to buy art.

Posted by Maxine Schreiber at 7:01 AM No comments: