Sculpture at the Norton 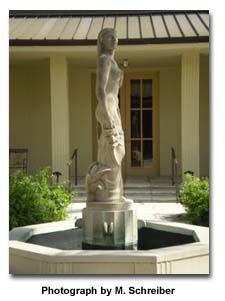 The sculpture filled courtyard at the Norton Museum in West Palm Beach is a place that I always enjoy visiting. A member of the Norton since I moved to Florida twenty-six years ago, I have attended innumerable membership previews where cookies and punch or hors d’oeuvres and wine were served outside in the courtyard. There one can admire the sculpture and the lush flora while sipping drinks and socializing. On other visits, I have gone out to the courtyard to relax, meditate, and rest my feet after wandering around the galleries. I love the classical sculptures particularly the sensuous ones of Pan.

Last Friday a wonderful exhibit opened which will be on display until the end of September. The show, Off The Wall: The Human Form in Sculpture represents American and European figurative work from the late 1700s to the present. Now one can enjoy beautiful sculptures both in and outside the museum. Beginning with small figures and busts, 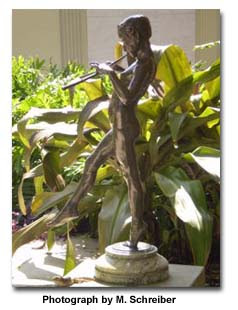 the show includes works by Degas, Brancusi, and Picasso and everything from classical to abstract pieces. I was amused to see Max Ernst’s surrealistic Head (1960), a large translucent blown glass head with three glass circular disks to suggest facial features. Though definitely not one of my favorites in the show, it did make me smile.

I was pleased that several female artists were represented. Among them was a local black sculptress named Augusta Savage (1892 – 1962), who achieved recognition in West Palm Beach before she made her home in New York City. Her small bust of a young black male, Gamin (1929) was one of my favorites.

The thirty works include several full figures and a couple of massive pieces. I particularly enjoyed seeing Duane Hanson’s unbelievably realistic Young Worker (1976) from the permanent collection, the gorgeous bronze sculpture of The Goddess Avabkitesvara (1930) by Allan Clark, and Zur with Dog (1989) by the Israeli artist Boaz Vardia.

If you haven’t already heard, it’s worth mentioning again that the Norton Museum received a National award last year. The Norton Museum was 1 of 5 museums out of 17,500 museums nationwide that won the 2008 National Medal for Museum Services. The award, the nation’s highest honor, is given to institutions that make a difference in their communities, and in addition to the medal each museum receives $10,000. Kudos to the Norton!

Posted by Maxine Schreiber at 10:39 AM No comments: