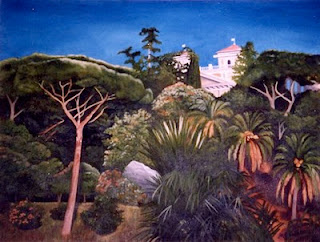 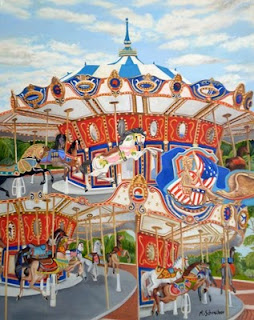 It's only the end of September, but the season is beginning to rev up. Next Thursday, October 7, 2010 from 5:30 to 7:30 p.m. is the opening of Landscapes: Painters of Scenery at the Lighthouse ArtCenter in Tequesta. Clay Surovek of John Surovek Gallery in Palm Beach juried the show, and I was pleased to have two of my paintings included in the exhibit. One is "Sin City," a large collage painting of my Las Vegas experience in 2008 (I used the image for a blog I wrote a couple of months ago). The other is "Sugar Sand Park Carousel," a 24" x 30" oil on canvas pictured to the left.

I was particularly pleased when I heard from the Lighthouse, because a couple of days before I received a rejection from “Land-Escape” for "Roman Sunset" (pictured to the right). Coincidentally, the Palm Beach County Art in Public Places exhibit at the airport is having an Artists Reception also on October 7th. In spite of the rejection, I’m nearly finished working on a 24” x 30” landscape of a waterfall and Japanese sculpture in the Morikami Garden, and I’m thinking about doing another collage painting. I decided to concentrate on painting for a while because the rejections from agents and publishers are more discouraging for the time being.

Before I went up north this summer for a two week vacation, I sent a query letter, table of contents, and a chapter of my non-fiction, The Fabulous Art Scene, A Guide to the Art Community in Palm Beach County Florida to Pineapple Press, which publishes books about Florida. I was very optimistic that they would be interested in my regional guide, a compilation of my articles in Examiner.com, so I was deeply disappointed when I received a standard rejection letter. Still the very next day, I emailed a query to Leapfrog Press about my novel, Spirit Seekers. The novel is currently a finalist for a Florida Writers Association Royal Palm Award.

Usually I have to wait weeks or even months to get a response to a query, but the very same day that I emailed the Leapfrog query, I received an email requesting a ten-page sample of the novel. I was so proud of myself that I hadn’t let the Pineapple Press rejection devastate me, and I decided that Leapfrog would be my publishing company. I went off to Massachusetts feeling confident, but not willing to look at email while I was away. I didn’t want to spoil my vacation in case I received a rejection, and I decided I could wait until my return home to check my email.

The rejection arrived last week. It was almost anti-climatic by the time I received it, because I already felt rejected. But I was so busy painting and covering A Unique Art Gallery for the Artists Association of Jupiter that it wasn’t until the actual rejection letter arrived that I realized I hadn’t sent out a query in weeks. I let the art scene (painting, the gallery, openings, and writing Examiner articles) distract me.

At some point though, I probably will again pursue publication. After all, the Florida Writers Conference is in three weeks, and who knows? I may win an award, and I love the manuscripts that are sitting in my closet. I really do believe that they deserve to be published. They may not be the best works ever written, but they are at least as good as much of the stuff out there. Blah, blah, blah… rejection stinks.

Posted by Maxine Schreiber at 3:07 PM No comments: