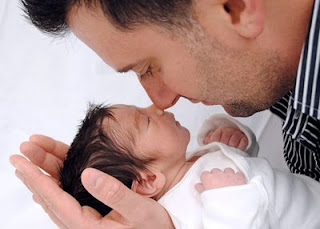 On December 8, 2010 my friends, Carrie and Mike, delivered their new baby boy, Joey, who is now two weeks old. I wish I could say that I took the photograph of him and his father. When I saw it, I knew I had to paint it. Carrie emailed me the image, and though I never paint portraits, this one of Mike and Joey is an exception. I started the under painting a few days ago, and I think I may be able to pull it off.

It struck me as very coincidental because “New Beginnings” is the theme of the Second Wednesday Open House at A Unique Gallery on January 12, 2011. I realized that if I can finish the painting in time, it would be perfect to exhibit in the show. This Second Wednesday is particularly important to me because the proceeds of sales and the raffle will benefit the Mental Health Association of Palm Beach County (MHA). The theme was chosen to acknowledge the opportunities in the New Year for the recently established artists collective, the recipients of MHA’s services, and everyone’s chance at a new beginning.

Since 1949, MHA has been dedicated to improving the lives of people who are touched by mental illness. Through advocacy, education, research and outreach, the organization reduces the stigma of seeking mental health treatment and leads a community collaborative effort to increase access to care. My original involvement with the association began over twenty years ago when I owned my private psychotherapy practice. As a healthcare provider I appreciated the support I received from MHA, and now I’m pleased that it will be the recipient of the gallery’s fundraising.

January’s Second Wednesday is also meaningful because my Dad was chosen to be one of the featured artists. If he were still alive, he would be joyful. Dad would have loved Carrie and Mike too, and he would have wanted to do the portrait of Mike and Joey which he would have captured with his pastels. He was great at drawing people, and perhaps that’s what held me back. There was always a bit of competition between us, and I was intimidated by his masterful work. Still, I haven’t really been motivated to do portraits, so perhaps my focus on landscapes had nothing to do with him.

Lupe Lawrence, my friend and a fellow landscape artist at the gallery, shared with me that someone told her she couldn’t paint portraits. That’s all she needed to hear and proceeded to begin painting them. She recently exhibited one of her powerful portraits in the “Peace on Earth” exhibit, which will be on display at the Lighthouse ArtCenter in Tequesta until the end of December. I’m hoping my portrait turns out as well.

In any event, I’m looking forward to the “New Beginnings” open house and I’m inviting everyone to attend. It will be from 5:30 to 7:30 p.m. at 226 Center Street in Jupiter just west of Alternate A1A next to the Ale House in Center Plaza. In addition to my Dad, Herman Schreiber, three other artists will be featured: sculptor Norm Gitzen, and painters Chris Oakes and Genevieve Johnson. Hope to see you there, and in the meantime have a joyous holiday. Happy New Year!

Posted by Maxine Schreiber at 6:28 AM No comments: