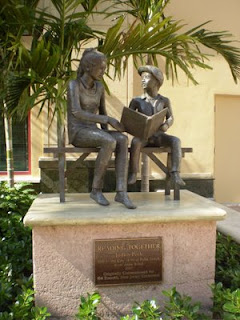 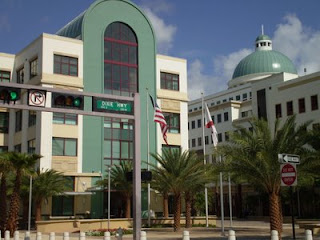 Last April after a trip to Disney World, I wrote a column for BestofArtists.com entitled My Hero. To me, Walt Disney was an artist though many would argue that he was a cartoonist and even more importantly, an entrepreneur. Apparently I am not alone in my opinion, however, since the Norton, most definitely an art museum, has come through once again. The Music Behind the Magic: Disney 1928 - Today, a wonderful exhibition, opened recently and runs through September 6th. It explores the role music has played in Disney animation, TV shows, in film, and on Broadway.

Mostly interactive, the exhibit captures the magical feeling one has in Disneyland as it invites the viewer to enter the world of animation and the Disney vision. One can look at cartoons through scopes or on screens while listening to artists and historians explain how the music enhances the visual drama. I was delighted to put on headphones while I watched excerpts of Bambi, Dumbo, and Lady and the Tramp. Learning about Disney’s sense of humor while watching the hippos and alligators perform ballet in my old favorite, Fantasia, made it even more pleasurable.

A Disney exhibit would not be complete without some drawings. This one includes The Enchanted Tiki Room acrylic by Colin Campbell and two watercolors, the Haunted Mansion and Pirates of the Caribbean, by Marc Davis. The show also contains memorabilia from the ‘50s, ‘70s, and ‘90s mouseketeer shows as well as the spectacular costumes designed by Julie Taymor for the Lion King.

Typical of a Disney experience, the show brought out the child in me, and I imagine it does in most visitors. I believe Walt would say, it’s for children of all ages. Though kids seemed to be getting a kick out of the sound effects room, I found their noise distracting at first. I had no idea how much fun they were having until later when my friend, Jane, and I decided to enter the area. We made at least as much noise when we attempted to record our own sound effects for a Mickey cartoon. I say attempted because unlike the kids, we never were able to figure out how to do the recording. That didn’t diminish our enjoyment.

A visit to the Norton Museum is a great excuse for making a trip to downtown West Palm Beach. If you don’t eat a gourmet lunch in Café 1451 at the museum, you can take a short ride to City Place where there are choices of excellent restaurants in the outdoor shopping and cultural center. There you can also enjoy looking at the beautiful fountains and the European style architecture. Or better yet take a free trolley to Clematis Street to see the elegant architecture in the recently completed City Center. The civic complex includes the brand new four-story public library, City Hall, and the Palm Beach Photographic Centre, a non-profit cultural and educational institute.

Above are my photos of City Center and of the sculpture Reading Together created by Judith Peck, which sits in front of the library in the plaza courtyard.

Posted by Maxine Schreiber at 1:59 PM No comments: