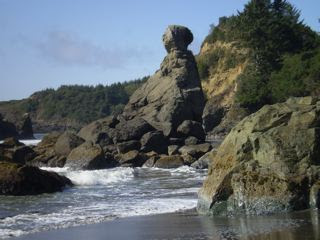 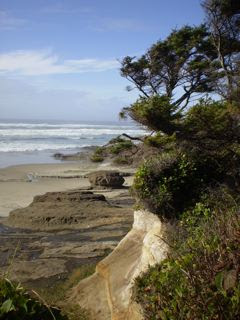 Two weeks ago I returned from a fabulous trip to Oregon and northern California. I had no idea that the Oregon coast was so gorgeous. It’s one of the most beautiful places I’ve ever visited, and it was wonderful being on vacation there. No painting. No writing. Just being.

My days were spent hiking on cliffs overlooking a fierce ocean and rustic beaches with huge rocks, monoliths like the ones in Monument Valley - the kind of beaches where you would expect to see wild horses running. I didn’t see any horses, but we did see a deer one day on a hike in Manzanita, and on several occasions we were entertained by the barking of sea lions and seals. When we weren’t hiking by the ocean, we were walking trails in the redwoods, which were equally amazing, powerful, and beautiful. I felt so small in every sense.

But vacations end. Since my return home, life has been busy. I did a Q & A with Gary Erbe for the Examiner. He is an unbelievably talented and skilled artist, and also a lovely man. Both he and his wife were warm, down to earth, and very generous with their time and knowledge. Gary even shared with me his formula for the medium he created using linseed oil, stand oil, copal varnish and turpentine. If you haven’t been to his solo exhibit at the Boca Raton Museum of Art yet, you have until November 8 to see it. Or go to my Examiner page to read the article and see a slideshow of ten of his paintings.

The evening of October 9 was the opening reception of Women In The Visual Arts’ exhibit at the Armory Art Center. My painting, Cruising the Caribbean, is part of the large show which includes the work of 154 artists. The show ends on October 29.

Last weekend I enjoyed a Sunday afternoon at the Norton Museum. I went to see New York, New York: The 20th Century exhibition. I missed the Press Preview, which took place when I was away, and I was eager to see the show as well as revisit the George Segal: Street Scenes exhibit. Both shows are there until the end of December and both are worth seeing. On that Sunday afternoon, the Klezmer East Trio performed a concert in the auditorium adding to the pleasure of a museum visit.

Then this past Friday, October 23, was the opening reception at Urs Art Studio Gallery at 802 N. Federal Hwy. in Boynton Beach where five of my oil paintings and four of my dad’s pastels are on display until January 10. I’m keeping my fingers crossed that they will sell. In the meantime, I’ve started painting a landscape of an Oregon beach. It’s one way of keeping the vacation alive.

Photos above by M. Schreiber: On the left, a view on a hike in Yachats, Oregon. And on the right, a view from the house in Trinidad, California

Posted by Maxine Schreiber at 11:50 AM No comments: